This post was originally published on our old blog, The Catbird Seat

Jon Heyman reported trade talks involving Jay Bruce and the White Sox are dormant in the wake of the Austin Jackson deal.

To be fair, Bruce is a power-first (power-only?) platoon guy with below-average defense. Saying that the Sox are not looking for a starter doesn’t necessarily disqualify Bruce; someone probably best used in a DH rotation.

The Sox also don’t need to be talking about trades Bruce right now. As I argued yesterday, his presence would make for a slow, inflexible roster unless the Sox have a way to move Adam LaRoche, and if they did, we wouldn’t be here. What they need to be doing is actively scouring what’s out there when LaRoche or Avisail Garcia bottom out or get hurt, because that is a real real real possibility hanging over the roster this season.

2. It’s normally not worth the time to focus on every article with a different opinion, but what David Haugh put out in a major Chicago news outlet is such an inaccurate representation of the state of the franchise that it bears a rebuttal.

Haugh joins a growing number of mainstream Chicago media members who are bizarrely sour on Adam Eaton: a great offensive player since the moment he donned the White Sox uniform. Eaton has repeatedly had his visible faults–below average center field defense, underwhelming base thievery–mistaken for damning ones, unless they are simply substituting for unspoken ones. But Haugh’s assertion that he would be a fourth outfielder behind Austin Jackson and a theoretical Jay Bruce acquisition seems based on information on 2013, back when both were impact players.

Rebuking the way the Sox and the league clearly value Eaton, Jackson and Bruce on nothing more than an unsupported assertion would be a bizarre launching point for a column, but it’s capped by an ill-advised comparison to the Cubs rebuild, seeking to contrast their youth movement to the Sox collection of one-year deals with veterans or “mercenaries,” as he put it. In doing so, Haugh is comparing the Cubs core to the Sox supporting cast, and then expressing shock at the stark contrasts.

The Sox core: Sale, Quintana, Abreu, Eaton, is mature save for Rodon, who is nevertheless ready to produce. Surrounding them with raw youngsters, as Haugh laments the Sox not taking a shot with Erik Johnson, Tyler Saladino, Micah Johnson, Trayce Thompson, Carson Fulmer and Tim Anderson, would be inappropriate and setting them up for failure and a wasted year, especially given that the first four names of this group might not ever be regular major league starters. Filling in the supporting cast with veterans is not dissimilar from the Cubs are doing now; as their interest in turning over full-time work to Javy Baez and Albert Amora has suddenly evaporated as their playoff dreams have bloomed (and those guys are actually prospects).

If there’s a criticism to be launched of the mercenary crop, it’s that the Sox emphasized bargains and and avoiding commitment over acquiring quality too many times, especially to fill out a roster that’s supposed to be aimed toward making the most out the years Sale and Abreu have left on contract. Instead, Haugh speaks critically of the Sox payroll reaching even $120 million, and knocks them for another “go-for-broke” season, when pretty much every non-core player will fall off the books after 2016.

In aiming for a story drawing a contrast between the young and old on the Sox roster, Haugh ignores the ages that matter:

3. Carlos Rodon is going to work on throwing his changeup more, or so he says to Scott Merkin.

“It’s just getting the feel back from throwing it. Just keep throwing it when I play catch every day, in the sides, in the games, especially in these Spring Training games. That’s what will make it better.”

As Merkin points out, in the furor of trying to hold his own as a major league starter pushed Rodon’s changeup to basically a show-me pitch (8.7 percent). Spring gives him a chance to reboot and go through the motions of working it in without consequence to where he hopefully gets comfortable featuring it, but it’s all projection until we see what he turns to when he’s challenged. That he’s pretty darn great just when he can throw his fastball for strikes is a solace, and also what’s holding him back from having to trust his changeup.

4. Spring Training is weeks upon weeks of dullness, lulling viewers to sleep to the point where Opening Day’s intensity is a sudden surprise. Then you hear something like Chris Sale vs. Sonny Gray will be the first game of the season and being excited about baseball feels very real and pressing.

Sale has only faced the Oakland A’s five times as a starter. He has never faced Sonny Gray, but somehow has managed to face off against the oft-injured Jarrod Parker three times.

5. Carlos, man, what happened to you? 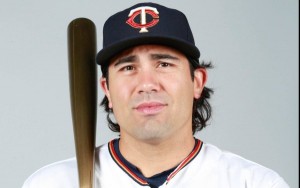 In all seriousness, Quentin seems like he’s in a good place physically and mentally. Here’s to hoping for a productive return to form for him, and that he’s been rescued from whatever temporary existential hell produced this image.