Imagine that, for whatever reason, someone lined up a number of famous artists, living or dead, and asked them to represent the 2016 baseball season. Andy Warhol might make a silkscreen of a dozen Noah Syndergaards. Caravaggio, with his penchant for depicting dramatic scenes with intense lighting, would probably paint a high-leverage at-bat from a World Series game. Rembrandt, while tempted to take the mound and paint a corner, might replicate one of his paintings of guild members with the Cubs. Most would focus on the biggest names and most thrilling moments.

When I say most instead of all, I’m thinking of one of my favorite painters, Pieter Bruegel the Elder. For the unfamiliar, he was a Flemish painter of the 1500s whose most famous works are large landscapes that contain numerous smaller scenes within them. In several of his works, he takes an event from religion or mythology, one that would typically be the dramatically placed in the foreground of the image, and instead puts it in the background without calling any attention to it. If that narrative weren’t in the title of the piece, maybe you’d never notice it.

One of such work is called Landscape with the Fall of Icarus. If you’ve read any Greek mythology, you may remember that Icarus made wings out of feathers and wax, which he used to fly away from a prison on the island of Crete. He eventually got overconfident and flew higher than he was supposed to, causing the wax to melt and Icarus to fall to his death in the ocean below. In Bruegel’s painting, this horrifying occurrence is barely visible; all we can see are Icarus’s legs, sticking out of the water in the bottom right of the painting. 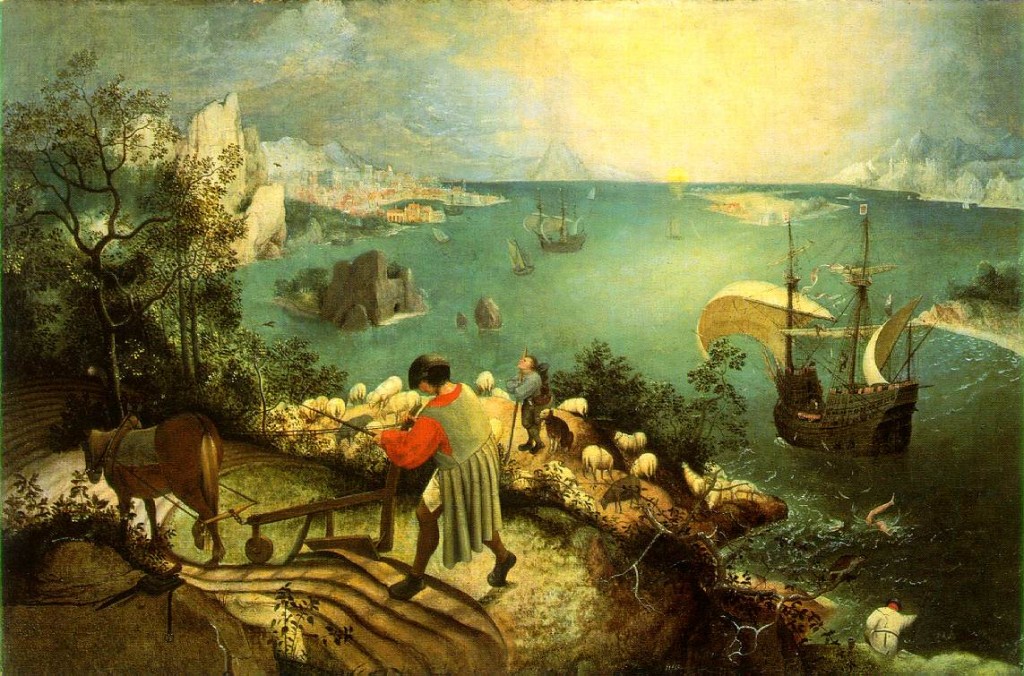 If Bruegel felt lazy, it’d be pretty easy for him to portray the 2016 MLB season. He just has to take Landscape with the Fall of Icarus and add a tiny little White Sox hat, floating in the water a few yards away from Icarus. Maybe the right leg has Mat Latos’s calf tattoo for good measure.

Okay, that’s a bit hyperbolic. Even so, the White Sox have fallen apart in nearly unprecedented ways over the last month. Here are a few attempts at placing this crash in historical terms:

Now, if you’re able to recover from White Sox-induced whiplash, it’s easy and prudent to frame this whole occurrence in less extreme terms. The White Sox are a talented but profoundly flawed team that got very lucky to start the season and very unlucky afterward. They were expected to be about .500 this year, and that’s where they are. It’s still the best guess for where they end up. (PECOTA actually has them above .500 for the rest of 2016.) How they got here wasn’t the most fun way for the fans or the players, but the order they played the games in doesn’t tell us a whole lot about the quality of the team over and above their results. (Even coming up with those “fun” facts about previous teams that cratered requires a bit of cherry-picking.)

You can extend that framing of the situation to Bruegel’s Landscape in two ways. The more measured one is to point out that these things just happen and we shouldn’t ascribe real significance to them. While the season’s been strange thus far, unless the White Sox’s losing ways continue totally unchecked this start won’t be anything more than trivia, salted away until the next time some team sprints out of the gate and then faceplants.

The more outlandish take is to say that, despite the title, the Landscape needn’t be about Icarus at all; the curators and art historians who named it merely chose one tiny corner of the painting to invest with significance. In the same way, no one portion of a baseball season is inherently more important than any other unless we choose to invest it with significance. We can and do remember teams and players not just (or even at all) from their record or their WARP but instead from the symbolic, subjective, often strange moments we associate with them.

If Landscape with the Fall of Icarus were truly about the 2016 baseball season, it’s probably Mike Trout or Manny Machado or Kris Bryant walking in the foreground, and maybe (probably) most people will say that’s the memorable part of the painting. If I want, though, I can make it about Icarus. Regardless of what happens for the other 29 teams or how the Sox play the next 4 months, 2016 might always be about these strange first 60 games.

Data via Retrosheet and Baseball-Reference.

Tags: Art, Chicago White Sox, The Chicago White Sox Being Awful Is Art |
Frank Firke
Follow @ClownHypothesis
Frank Firke grew up about 3 miles from Comiskey Park but now lives in New York City, where he crunches numbers for a tech company. He also writes for The Hardball Times.
read more from Frank Firke