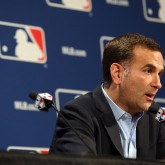 The Chicago White Sox’s offseason has officially kicked off in earnest one day before December with the announcement that catcher Omar Narváez has been traded to the Seattle Mariners for RP Alex Colomé. Pressed into starting duty after Welington Castillo’s PED suspension, Narváez broke out on offense. Omar had always been reliable for an above-average OBP […]