With the season looming closer each day, the White Sox are still searching for the answer to the question many are posing, “Who will be the White Sox fifth starter?” since with John Danks being the team’s largest monetary expense in 2016, it’s only safe to assume he will be taking on the role of fourth starter one last time.

That leaves reclamation project Erik Johnson, newly acquired starter Mat Latos, and waiver wire addition Jacob Turner in the running. Turner comes to the club on a 1-year $1.5 million deal, and is out of options.

We can see already that perhaps Erik Johnson’s control issues are too vast for him to mitigate before the start of the 2016 season, potentially already having sealed his fate for 2016. While Mat Latos may not bring his career-best numbers to the South side this season — he’s still an established big league starter. That’s a track record that a young 25-year old Turner does not yet possess.

So what’s the case for Turner then? He seems to be the odd man out in this situation.

Not having pitched in the major leagues since 2014 due to a right flexor strain, his role in many organizations would likely be defined as “open to interpretation”. When baseball last left off with Turner, he was three years into a major league career that has landed him in Detroit, Miami, briefly on the North side of Chicago, and now on the South side of Chicago. In only two of those seasons, 2013 and 2014, had he served as a starter.

Coming to a club where you’re competing for a fifth rotation spot with someone such as Mat Latos could serve to hinder your hopes of establishing yourself as a back end starter if you’re still somewhat of a newcomer. Due to the context of  his situation coupled with the organization Turner is coming to, his skills seem best delegated to the bullpen right now.

The thing is, that’s okay for Turner. His makeup is one that can swing either way, possibly leaning towards the idea that working out the bullpen may be the best way to maximize his success. Turner can be good in short bursts, as we saw during his first White Sox start earlier this month, as well as his first start back from his injury. Turner cruised through two innings in which he only allowed one walk and one hit. He demonstrates decent velocity, which is always preferred in a bullpen role, his fastball topping out at 94.4 mph in June 2014 and 94.9 on the radar gun this Spring.

The main concern I have with Turner, whether he be in the bullpen or rotation, is the amount of contact he allows coupled with the lack of strikeouts. With a sinker and a curveball in his repertoire, he is a heavy groundball pitcher, posting ground ball rates as high as 52 percent with Miami, but a K/9 rate of just 5.6.

Turner posted a low walk rate of 2.6 BB/9 in 2014, coupled with a WHIP of 1.60 — which together serve as evidence that indeed, contact is an issue for him. Take a look at these batting average zone maps on two groups of pitches for Turner in 2014: 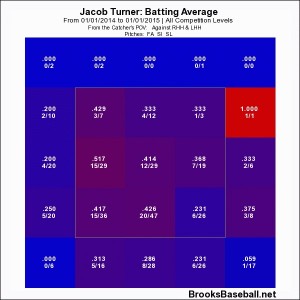 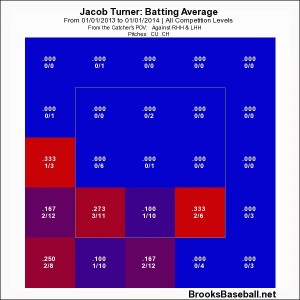 The zone map on the left is the batting average on his most frequented pitches, his fastball, sinker, and slider. The zone map on the right is his secondaries, his changeup and curveball. Contact. Lots of contact in the middle of the zone, and low and away to lefties.

A piece by Dave Cameron at Fangraphs posted in August 2014, suggests that Turner also does poor against — ca-ching — left handed batters. Cameron suggests that “barring some dramatic improvement from either his change-up or his curveball, he profiles best as a middle reliever.” Well, unfortunately, Turner would not see another major league season after the conclusion of 2014, the season in which Cameron wrote that piece. So we have yet to see if his change or curve have at all improved, perhaps making him a more effective starter with a strong weapon to use against lefties.

For right now though, Cameron is right, Turner best profiles as a reliever. If he can keep the ball on the ground, and begin to limit his contact a bit more, he will have a shot at being a good middle relief option for the White Sox in 2016.

The fate of the White Sox rotation will soon take definitive shape, and right now Latos is my guess to inherit the last rotation spot. Latos may not have been the most effective starter in 2015, and he may not prove to be any better than his competitors at the position, but having pitched 100+ innings for six of his seven year career while showing past ability to post ERAs in the mid to low 3.00 area, he seems like most logical option for now.

Turner may have skipped a year of baseball during a key time in his role development, but if he can pick up where he left off without showing regression and continues to work on limiting contact and raise his strikeout levels, he’ll be able to find himself a nice niche in the majors; be it in a starting rotation or a bullpen role. And remember, he is on a $1.5 million one-year deal in 2016, so the White Sox can always re-up if they feel he’s showing promise and potential.

Tags: Chicago White Sox, Don Cooper, Jacob Turner |
Cat Garcia
Follow @TheBaseballGirl
Cat Garcia is a freelance baseball writer from Chicago. When she is not writing or reading about baseball, she can be found at her place of employment, located at 1060 W. Addison Street.
read more from Cat Garcia