In December of 2015, the world of White Sox baseball was able exhale as the franchise announced the acquisition of the team’s first legitimate third baseman in years: former Cincinnati Red Todd Frazier. Frazier came to the South Side after being brought up through the Cincinnati organization and spending his entire big league career with Reds, via a three-way deal that also involved the Los Angeles Dodgers.

The deal would come at the cost of two White Sox top prospects, Micah Johnson and Trayce Thompson, and the departures would serve aa reminder of the South Side’s once barren farm system. The two would end up being sent to Los Angeles in the deal. However in baseball, you have to give a little to get a little, and Frazier was fair return for the currency spent.

After a 2015 season that was held such high hopes faltered, the rose-colored glasses came off this past winter. White Sox General Manager Rick Hahn knew that this organization had not yet filled all of the deep holes that had been dug on the infield, and more specifically, the one at third base.

As I wrote about a few weeks ago, the White Sox have had a steady procession of players take the helm at third over the years, none of which produced at levels near sufficient enough to insure permanence. White Sox fans watched as Hahn welcomed in fresh new faces during the offseason of 2015 in the form of a first baseman, relief arms, and left fielders; yet all fans genuinely wanted was a player that could be relied upon at hot corner. After realizing that the internal options that had been set forth were not likely going to be the answer, Frazier came into the picture and things started coming together.

The Frazier deal broke up the band on a rebuilding Cincinnati team who are just a few more all-out losses away from pressing the “blow it all up” button with the veterans they still house, who are currently worth more in prospect return for the future than in contribution to a futile NL Central Division race now. Frazier, who turned 30 this offseason, hasn’t much peak production time left in the tank and is much better suited to a team who is looking to win now. That team is the White Sox.

All the pieces of the puzzle seem to fit. The Reds needed prospects, the White Sox needed a productive third basemen, and Frazier is best delegated to a role in which the skills he possesses can be used in a push for a playoff race. Now that everyone is satisfied, the question becomes what sort of true talent should the White Sox expect out of Frazier in 2016?

Frazier had an aggressive first half of the 2015 season, in which he hit an uncharacteristic line of .284/.337/.585. For a bit more context as to what exactly those numbers merited, Frazier’s peripherals were even more telling of Frazier’s sudden emergence. Frazier was suddenly blowing the league away with his newly unleashed power stroke, and posted an ISO of .301, coupled with a wRC+ of 146 and striking out just 17.4 percent of the time, about 4 percentage points lower than his career total. Baseball was suddenly enamored of Frazier, and this all came to it’s gaudy pinnacle at last year’s Home Run Derby. Those who hadn’t heard a lot about the so-called “Todd Father” wanted to know more, and those who had heard of him were either begrudgingly befuddled by his endless display of power (ahem *raises hand*) while those who had been on high on him from the start were preparing the best way to say “See, I told you Frazier could hit.”

But as compelling as Frazier’s first half of 2015 was, we can’t simply look at these numbers in isolation to get the best understanding of what we should truly expect of Frazier going forward.

Frazier can hit for power, and he does so well, but the first half of 2015 should not be looked at as more than an outlier than anything until we see it return at a more consistent rate. Frazier’s 2015 stat line at the end of the year (.255/.309/.498) looked more in concert with his career totals than reflective of what had happened from April-July, that being due in part to the lopsided totals he had between the two halves. Had Frazier produced at the rate he had during the first half and then saw his production normalize in the second half, you’d still see 2015 reflected as a strong campaign. However, due to the fact that his numbers actually became weaker than the norm in the second half (.224/.274/.390), when you put the two totals together, the season didn’t look like anything to write home about, with the exception of his power numbers.

Take a look at Frazier’s totals over his years in the majors. I’ve left out 2011, his debut season, as he only played 41 games at the major league level that year.

The data is somewhat puzzling as there seems to be no real consistency as of yet, except for the fact that Frazier has always produced to at least league average numbers, minus the poor year he had in 2013. So maybe that’s the consistency; Frazier is good at being average and perhaps a bit above in the power department.

Well, then what was the magic formula that Frazier stumbled upon early last season?

Some leading evidence was found last season pointing to what Frazier’s first half dominance could have been attributed to. The first finding being that Frazier was putting the ball in play to his pull side at a dramatically improved clip in 2015. Frazier was also hitting high fastballs for power and doing so quite often. But what’s most interesting is the pull power production. What this tells us is that last year, pitching inside to Frazier in attempts to jam him and make weak contact on balls wasn’t working when mixed with his exceptional power surge, and attacking him with pitches high in the zone in attempts to lure him into easy flyball outs wasn’t working either — his power would simply dominate and take these pitches either into the gap or out into the seats, the opposite of the pitcher’s intention.

The linked-to piece on his power is worth a read, as it delves further into theories of what could have caused Frazier to not just suffer a second half drop off but to perform below his true talent levels. So what does this mean for now?

An interesting note from a piece on pull hitter tendencies tells us that over an extended period of time (or perhaps in Frazier’s concentrated all-out-blitz phase), pitchers begin to recognize what a particular hitter is doing with the ball and adjust accordingly, locating pitches to areas of the zone where it becomes harder to pull with authority, and thus returning the idea of pitching inside to hitters in attempts to induce weak ground ball contact to its roots.

This became true in Frazier’s second half, as the Fangraphs piece linked above indicates. The piece shows us that Frazier’s groundball rate was unusually low in first half in favor of a higher flyball rate. It then shows that in the second half Frazier’s ground ball rate went back up to his career norm, while the flyball rate took a drastic dip. However, Frazier’s pull rate continued to spike in the second half, this time to an unprecedented level. A recipe for pulled ground balls and a power outage? You bet.

Unfortunately, though it’s still a small sample size, we’re seeing this happen again for Frazier. Check out his heatmap on ground balls so far for 2016: 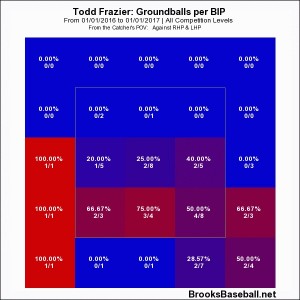 Frazier is still rolling over on those inside pitches, but the good news is that he’s still making productive contact in areas of that zone that aren’t just high or inside, indicating that he too, will make proper adjustments. Take a look: 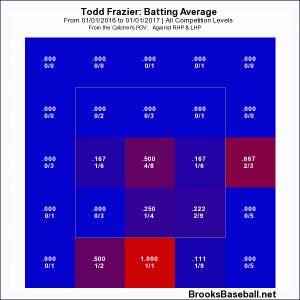 Baseball after all, is a game of adjustments. If we didn’t have things such as this to track all season, the game would become quite routine and predictable. Where’s the fun in that?

Sure, Frazier is 30, and there may be a small community of folks thinking that he’s peaked and it’s all done for, but not to worry. It’s too early to draw any conclusions, and as research has shown, power is an “old-player” skill, as opposed to speed and on-base ability which are “young player” skills, normally peaking around age 26-28. Power however,  lasts, and lasts.

Given that his true talent lies somewhere around league average coupled with plus power skills, Frazier (who is 25th in AL slugging percentage from 2012-2015) is just getting started in 2016. Will he find a new approach to put his power to good use? I’m going to say yes, Frazier may have had an exceptionally flukey first half last season, but the numbers don’t lie and the ability is there. It’s also worth keeping in mind that Frazier is coming to an entirely different league which does call for a bit of adjustment; many of these AL pitchers Frazier is seeing for the first time.

Frazier was simply ahead of the curve in early 2015, and the league adjusted to his findings. Perhaps Frazier’s power comes in short and unpredictable bursts that eventually all level out over the course of a season. Even with inconsistencies on offense, Frazier still delivers solid defense at third base and a positive attitude in clubhouse, all during a season that’s so far shaping up to be a promising one for the White sox, and there’s no doubt Frazier will be part of the effort on all fronts.

Tags: Chicago White Sox, Micah Johnson, Todd Frazier, Trayce Thompson |
Cat Garcia
Follow @TheBaseballGirl
Cat Garcia is a freelance baseball writer from Chicago. When she is not writing or reading about baseball, she can be found at her place of employment, located at 1060 W. Addison Street.
read more from Cat Garcia

2 comments on “Back to Normalcy: What Should the White Sox Expect of Todd Frazier in 2016?”

nice piece cat. hoping that frazier starts to pick it up, along with the cubano of course.