Wednesday night, the White Sox recorded their fifth shutout victory of the season, blanking the Blue Jays 4-0 en route to their sixth-straight victory and an MLB leading 16th win. On the back of a pitching staff that has allowed an MLB-low 2.42 runs per game, the White Sox have the best run differential in the American League, despite an offense that has yet to hit with much proficiency.

Just 22 games into the season,the Sox already find themselves in an enviable position. The team sits in first place in the AL Central by 3.5 games over the defending World Series champion Royals, the largest current division lead in MLB. Even if the team was to play exactly .500 ball for the rest of the year (PECOTA has their expected win percentage at .518) they would finish with a record of 86-76, their best record since 2010 (and right in the thick of the playoff hunt).

Obviously, no definitive conclusions should be drawn from 22 games (162 games is oftentimes insufficient for such). Furthermore, there are certain performances that are utterly unsustainable — Mat Latos isn’t going to set a modern era ERA record this year — nor will the bullpen maintain its minuscule 1.32 ERA. While the offense should tick up a bit as Jose Abreu re-finds his power stroke, it’s pretty safe to say the White Sox won’t sustain their current .727 win percentage.

However, it stands to reason that a 16-6 start says more about a team than simply a number of banked wins. Using a Bayesian lens — in other words, using new data to further our understanding of an underlying distribution — we can update our priors for a new expectation of rest-of-season performance.

Projection systems like PECOTA do just this — expected win percentage is dynamic and updated based on player performance. But, for the sake of argument, let’s throw out PECOTA and all specific information about this White Sox team. Instead, let’s ask the following: What does a hot streak like this say about a team?

To answer this question in a relatively naive manner, I looked at every team in the modern era (1920 on) that won at least 16 of their first 22 ballgames. Of the 88 such teams, the median end-of-season win percentage was .590. This is not particularly useful, however, as these results include the first 22 games. We would like to know the true talent of these teams, which is better approximated by how they did in the rest of their games. 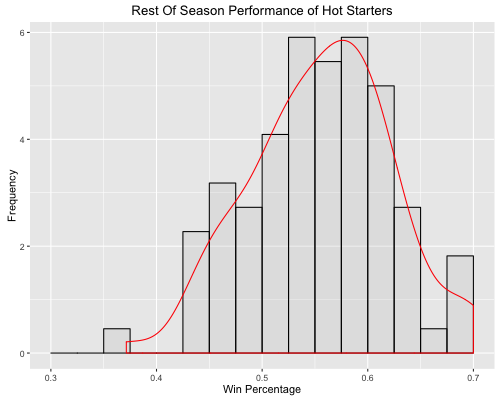 As it turns out, most of these teams did very well. Looking at how teams performed for the rest of the season, the median win percentage was a robust .556. Only 15 of the 88 teams played at a below .500 clip for the rest of the season (and four more at exactly .500). 60 of the 88 teams played at or above .528, the rate at which the Sox will need to win to achieve 90 wins.

With this in mind, we can safely claim that teams that start off as hot as the White Sox tend to be good teams, oftentimes exceptionally so. While it is certainly too early to claim the same about the White Sox, what we can claim is that this is more likely to be the case. And for a team that has failed to make the playoffs for the duration of the Obama administration, it’s encouraging to see that GM Rick Hahn may have Made The White Sox Great Again.

Tags: Balls On The Case, Best Team In Baseball, Chicago White Sox, Hot Start, Making Things Great Again, White Sox |
Ethan Spalding
Follow @spaldingballs
Ethan Spalding is studying statistics and math at the University of Wisconsin-Madison. He is currently an intern with the BP Analytics Team as well as a staff writer at BP Southside. A lifelong White Sox fan, he specializes in the acquisition and proliferation of Chris Sale Fun Facts.
read more from Ethan Spalding

3 comments on “Are The White Sox Actually Good?”

This is great work, Ethan.