I know Carlos Rodon is on the 60-day disabled list. I know that all too well. While that’s a complete bummer, there is still plenty of interesting material to go over about the young lefty. No, seriously. I will never run out of Rodon material. There haven’t been any major developments in terms of his injury (*update with everything we know at the bottom), but lets talk about him anyway.

Earlier this year, I wrote about how this was going to be the year for Carlos Rodon. That premise was based almost entirely on the fact that his cFIP and DRA had dropped, his walk rate dropped, and he was approaching more consistency with his pitch usage. Those things certainly do hold up as reasons he’ll improve and reach the potential we’ve all been expecting for the last two years. However, I have identified something interesting and perhaps telling in the mysterious 2016 season of Rodon.

Rodon’s biggest change from 2015 to 2016 was the drop in walk rate. The high rate of 11.7 percent in 2015 was clearly a concern. One of the most identifiable weakness, and maybe the only one, in Rodon’s prospect profile was his inability to throw strikes. He reached the big leagues despite it because his stuff was just that electric. When his walks got lower in the second half of the 2015 season, there was a natural sigh of relief. Ah, Rodon had finally figured it out. “He’ll throw strikes and have a great sophomore season,” we all said. Well, throw strikes he did. His walk rate dropped to 7.6 percent last season. It was an incredible improvement. And yet, his ERA rose while he looked far too hittable.

This past winter, Baseball Prospectus rolled out some new statistics for pitchers that helped us identify control and command. Control and command often become conflated in general baseball vernacular. However, there is a key distinction between the two. The image Jeff Long, Jonathan Judge, and Harry Pavlidis used to explain the difference (from the same article) is incredibly useful. 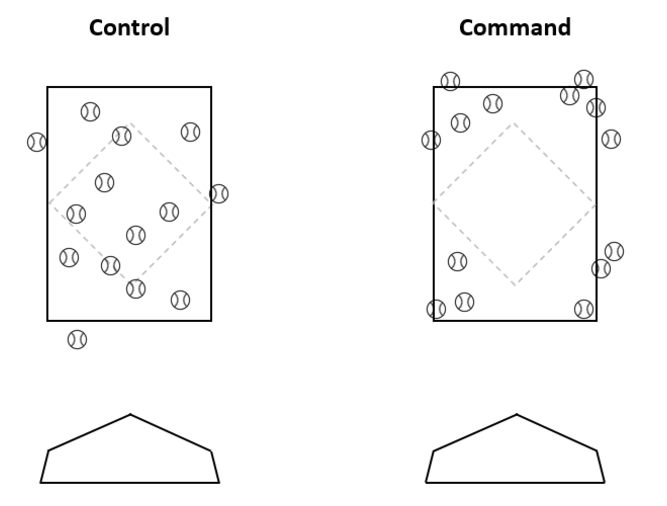 The difference is easy to see. Those with great control avoid walks, but they aren’t necessarily capable of keeping their pitches out of key danger zones. They throw strikes, but they also leave balls in the middle of the plate. Pitchers with great command, however, don’t necessarily throw a lot of pitches in the strike zone. They live on the corners and rely on swings-and-misses or weak contact. Command is far better to have than control. Rodon developed control during the time between the start of the second half of the 2015 season and the end of the 2016 one. He still has not developed true fastball command.

The two main statistics the Baseball Prospectus stat team used to measure control and command were CSProb and CSAA. You can read about the mathematical and mucky details in the article, but essentially CSProb simply measures the probability that pitches are called strikes. CSAA, on the other hand, measures a pitcher’s ability to hit his spots. For pitchers that excel at command, that often means leaving balls outside of the zone — or at the very least on the corners. The best CSProb pitcher is Bartolo Colon. He pounds the zone and thrives off getting outs via contact. The best CSAA pitcher is Zach Davies, but more recognizable for this talent and third in the rankings is Kyle Hendricks. He often puts his pitches on the corners and slightly outside of the zone in order to get swing-and-miss or weak contact. Got it? Good, we can get back to Rodon.

We already went over the drop in walk rate from season to season for Rodon. Perhaps it follows that his CSProb went up from 2015 to 2016. He had a higher probability that the pitches he was throwing would be strikes, so he walked fewer batters. His CSProb went from 46.3 to 48.3 percent, which took him from 98th in baseball to 34th (min 100 IP). That’s certainly a good thing! Pitchers like Clayton Kershaw, Chris Sale, and Max Scherzer all have good CSProb. Where the problem arrives is in Rodon’s CSAA. He saw a drop from an already low -1.46 to -1.55 percent from 2015 to 2016. The real problem isn’t necessarily the drop in CSAA, since the two values are within a reasonable range of each other. The problem is simply how bad it is in general.

In 2015, Rodon had the worst CSAA of pitchers with at least 100 IP. In 2016, despite his CSAA going down he was merely sixth worst in baseball. Perhaps this isn’t a convincing enough argument that he got hit hard because of his lack of command. After all, the NL Cy Young winner Scherzer had a worse CSAA than Rodon did last year.

Carlos Rodon got hit hard. That much we know to be true. His ERA rose, especially in the first half of the season due to this fact. A huge reason that ERA rose was because he was giving up more home runs.

Not only did he see a rise in fly balls in general, but there was also an increase in home run per fly ball rate. That’s a good indication that he was giving up a lot of hard hit balls in the air. Naturally, he saw a rise in HR/9 because of these factors. He eliminated the walk problem only to enter into a home run problem. That’s not the greatest tradeoff. What exactly changed?

Looking at the ISO against each of his different pitches over the last two years can be extremely telling. ISO attempts to isolate extra base hits, or power. Hence the name isolated power. Because of this, it can be telling about which pitches are producing the hardest and most dangerous contact.

This graph shows some erraticism that isn’t really related to the current focus. That giant jump in ISO against the changeup in 2015, for example, is mostly due to the fact that he’d never thrown it in the big leagues before then. The graph showing year to year change is much more telling in this case, but I did want to point out the massive drop in ISO against the fourseamer in August and September. Those were the months he pitched his best in 2016 (hint hint, wink wink).

There was a huge rise in ISO against the fourseam fastball from 2015 to 2016. That occurred while every other pitch was essentially producing weaker contact. The fastball is especially interesting, because it is often fastballs that we are talking about when we refer to command and control. The CSProb and CSAA numbers take all pitches into account, of course, but Rodon’s fastball command has always been the troubling part of his profile. It seems as though the control has improved, but the command has not. 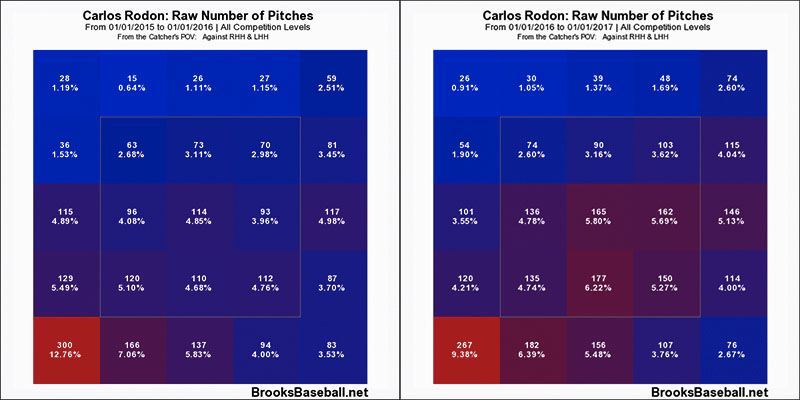 On the left is Rodon’s fourseam fastball in 2015. It wasn’t necessarily by design, but he didn’t pound the zone with the pitch. On the right is the same data but for 2016. There were a lot more fastballs in the zone, especially in the dangerous areas down the heart of the plate. This is almost certainly the reason behind a big increase in ISO against the fastball itself. That rise in ISO against the fastball led to more fly balls and subsequently more home runs.

Scouts weren’t wrong about Rodon when they noted that his command was a major concern. Following the 2015 season, many fans and analysts alike took the drop in walk rate from one half of the season to the next to be an indicator that the command was arriving. Then he lowered his walk rate even more in 2016 and saw an increase in runs allowed. This would be mystifying without the distinction between command and control. Rodon certainly did increase his control from his first season to the second one. What he didn’t improve, however, was his command. It might be awhile before we see Rodon on the mound again. There will be naturally tempered expectations because of his injury. However, when things get back to normal there’s one thing Rodon really needs to improve on. That thing is his command. If he can improve even just slightly there, he’ll finally have that heavily anticipated breakout.

Injury update: There isn’t a whole lot of news on the Rodon injury front. He was moved to the 60-day DL on May 4. With the injury retroactive to Spring Training, that only meant he wouldn’t pitch before the end of May. It wasn’t bad news nor good news. It was simply news.

Since then, Rick Hahn has talked a small to the media about the injury. He had no tangible news, but he did defend the way they treated him in the spring. You can read more about Hahn’s comments on Rodon in gone but not forgotten James Fegan’s piece.

Hahn says Carlos Rodon is still in Arizona, now throwing off mound. Still no timetable for return to #WhiteSox

More progress for Carlos Rodon. The lefty is scheduled to throw a simulated game at Camelback Ranch today. #WhiteSox

What we do know, from the excellent work by the White Sox beat writers, is that Rodon is in Arizona throwing. The first good news was that he had thrown off a mound. By time this is published he will have seemingly completed a simulated game. The White Sox have no reason to rush Rodon, but it’s always good news to see that he’s up and throwing and feeling okay.

All graphs and zone profiles are courtesy of Brooks Baseball.

Tags: Carlos Rodon, Chicago White Sox |
Ryan Schultz
Follow @@rschultzy20
Ryan Schultz is a pharmacist wannabe who writes about the White Sox and baseball in his very limited free time. His work can also be found at BP Wrigleyville and Beyond the Box Score.
read more from Ryan Schultz