On Tuesday night, the White Sox had one of the weirdest home run calls go their way. Yolmer Sanchez hit a ball with an unfathomable amount of spin on it. That resulted in Kevin Keirmaier, noted defensive genius with piercing blue eyes, completely misplaying the ball like a nincompoop. Perhaps it was Keirmaier’s horrible defense or maybe it was the strange flight path of the ball that made the umpires decide the hit was a home run. Regardless of why, the fact remains that the umpires on the field originally called it a home run. The move to review the play then hinged on whether enough evidence existed to overturn the call. That, too, resulted in a confounding conclusion that Sanchez had hit a home run. It was mystifying and hilarious, so why not relieve the whole experience?

First let’s take a look at the play as it unfolded for the first time on the White Sox broadcast.

It’s really hard to see what happens. The one thing that does stand out is Keirmaier overrunning the ball by a long-shot while also looking up into the sky (dome ceiling) wondering where his life had gone wrong. Sanchez pulled into third base, but he was immediately told by third base umpire, Kerwin Danley, that it was a home run. 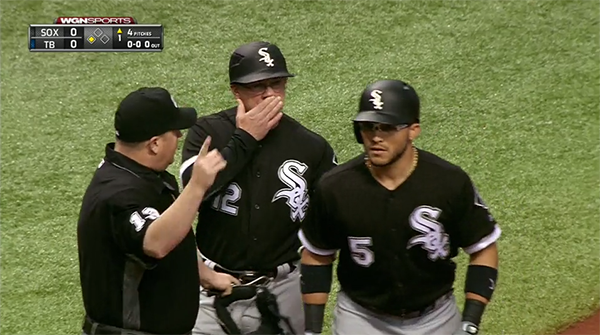 As Danley signals the home run call, White Sox third base coach Joe McEwing whispers something to Sanchez. What was this something? Who knows. Perhaps it was a private message of adoration or maybe it was just a funny joke. I like to think he was saying, “don’t ask questions just jog home.” 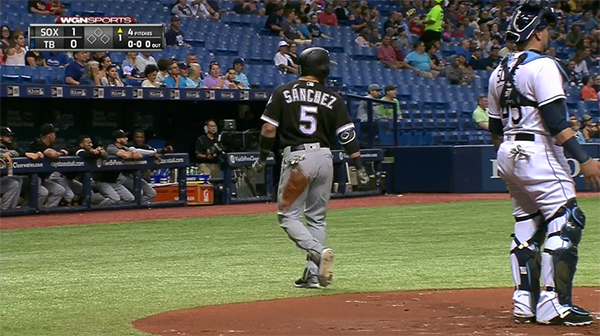 After receiving this advice from McEwing, what is the first thing Sanchez did? Ask questions, of course. If there was a thought bubble on this photo it would say, “wait are you guys sure? Did I really get a home run?” 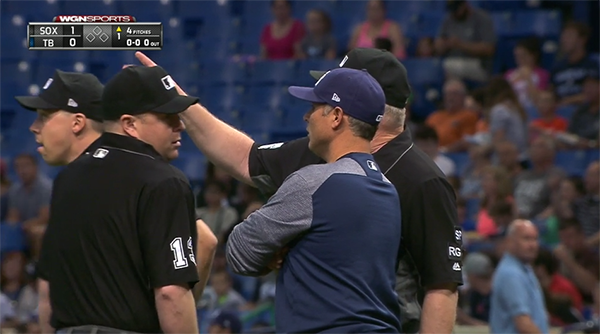 As Sanchez made his way to the dugout, still confused, Danley wasn’t Kerwinning everyone over with his call on the field. Rays manager Kevin Cash was dumbfounded by the call. One umpire, whom I cannot identify, is pointing towards the cable/wire/catwalk/mysterious U.F.O. that the crew believed the ball hit. Cash is trying to understand but simply looks like he has no idea what they’re talking about. Danley, the one who made the home run call, is giving Cash a look that says, “are you really questioning my judgement?” 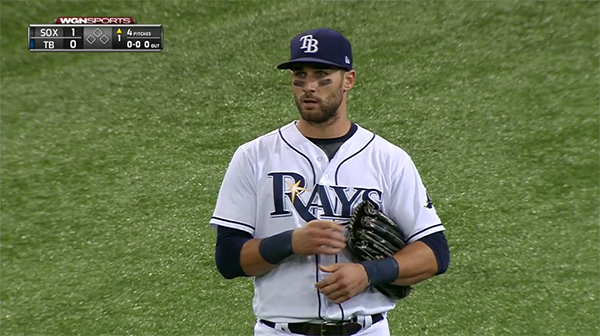 Meanwhile, Keirmaier remained in center field still confused as ever. Surely he knew that he had just misplayed the ball so poorly that it soared over his head as his arms flailed in the air. “If they call this a home run everyone will forget about my horrible defensive play,” he must have thought. Kevin, you’re very handsome, but you’re wrong. I will not forget how poorly you judged that ball.

All that was left to do after the review somehow upheld the call was celebrate. Sanchez did so in typical Yolmer Sanchez style, including the whole dugout in his fun. As Hawk would say, “He looks up (in utter confusion), you can put it on the board! Yes! No? Maybe? YES!”