It just so happens that in his worst season at the plate, José Abreu, for the first time, was the American League’s All-Star starting first baseman. Given the circumstances, the selection makes sense. The AL’s first basemen don’t carry the same name recognition or production level in 2018 that they have in the past. And when All-Star voting started on June 1, Abreu was hitting .301 with an .888 OPS. That day, he started a 7-game hitting streak.

But since then, Abreu has struggled mightily. Over his last 36 games, Abreu is slashing just .183/.239/.317 with four home runs. Amid headlines of being the sole White Sox representative in Washington, Abreu had acknowledged his slump, and credit to him for that. But 95 games into the season, Abreu’s hitting just .253 with a .311 OBP and 13 home runs. I took a look into what has changed during Abreu’s slide.

It seems that over roughly the last month, Abreu is struggling with breaking pitches, and in particular, ones outside of the zone. And as a result, his performance in other offensive categories has waned.

As you can see, Abreu’s average has declined across most pitch types. But against sliders and curves, Abreu’s inability to produce has been significant. Many of these pitches have landed in the lower-outside surroundings of the strikezone. If you focus on the squares outside of the zone on the lower-right hand side of the graphs below, you’ll see that Abreu is taking a lot more hacks at low and away pitches than he did to start the season. 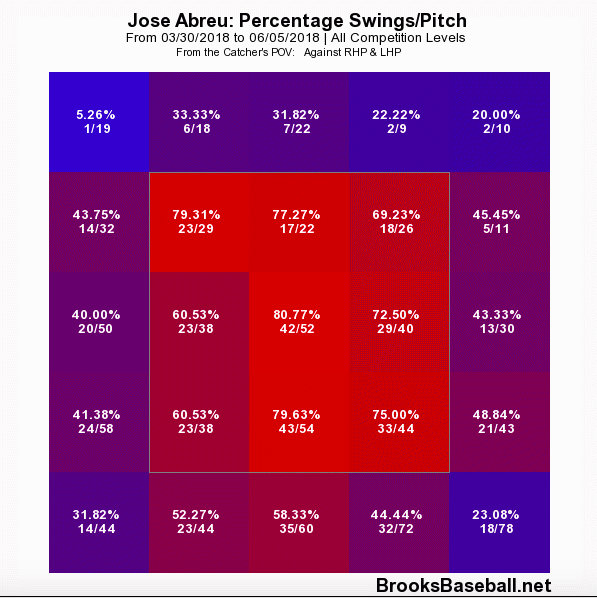 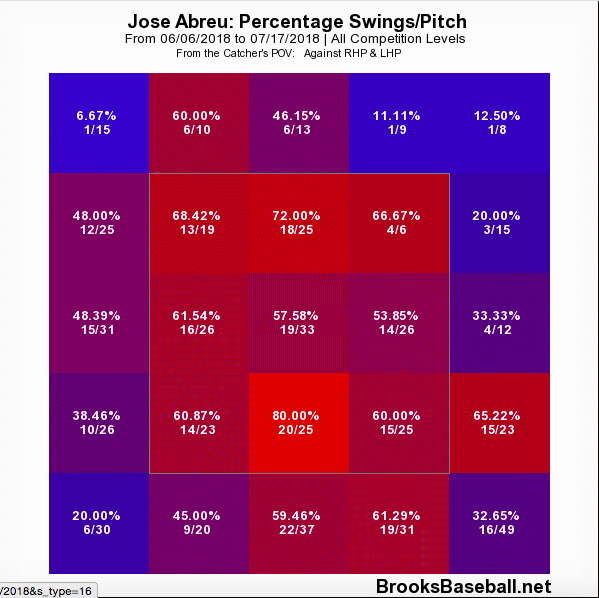 Often times, when players chase outside breaking balls, they swing and miss more often. So it’s interesting that Abreu’s whiff rate hasn’t changed much. In fact, it’s decreased a bit during his slump. In April, his whiff rate was 24.1 percent. It was 23 in May, 22.5 in June and 22.9 in July. So what’s he doing with those low and outside pitches?

Well, hitting a lot of groundballs. 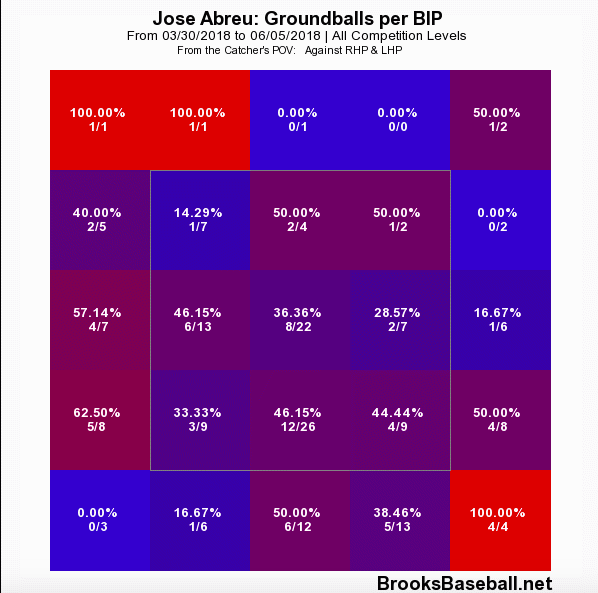 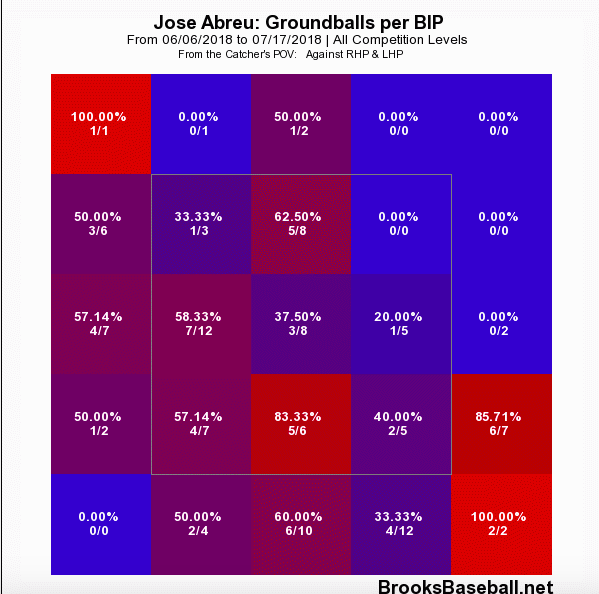 This probably attributes to the biggest sign of Abreu’s slump: Weak contact. Turns out, when you’re hitting grounders on low and outside pitches away from the strike zone, you’re probably not going to hit them very hard! But like his batting average, Abreu’s hard contact numbers aren’t just limited to one pitch type or location.

It’s unknown whether the low and outside grounder was symptomatic for Abreu’s weak contact across the board, but it is known that Abreu’s hitting the ball softer than he ever has. In June, he averaged an exit velocity of 89.1 mph, his fifth-lowest monthly mark in his 22 months at the MLB level. In July, his average EV was just 84.1 mph, by far his worst of any month in the majors.

Overall, the biggest cause of Abreu’s slump is likely his weak contact. The harder you hit the ball, generally, the more success you’ll have. And what can turn this slump around? Abreu has attributed much of his recent decline to his focus on the strike zone, and he may be right. As highlighted above, his swings on low and outside pitches have helped generate ground balls, which aren’t the dingers and liners we’re used to seeing Abreu hit.

As soon as he starts hitting the ball harder, look for Abreu’s average and production numbers to rise. His batting average on balls in play is a very low .282 right now, especially when you consider his lowest BABIP in a season is .327. Yes, BABIP helps to measure a batter’s luck, but it also tends to decline with softer hit balls.

It looks as if Abreu’s simply slumping, rather than pitchers figuring out that he can’t hit a certain pitch or that they can beat his bat to a certain location on the plate. Maybe what he needs is an All-Star break? I guess we’ll have to see.

The tendency to chase low and away more certainly isn’t encouraging, but isn’t that recent performance against fastballs much more concerning (if there is a reason to be concerned)? The sample is larger and the baseline for good performance is higher. The fact that he has hit essentially the same against fourseams, and much worse against sinkers, compared to sliders is much more alarming from the fastball perspective – almost everyone has worse numbers against sliders.

But giving a look at his performance against harder pitches, his whiff % remains pretty steady and his exit velocity isn’t down much from his career trends. If we see another month of him struggling against fastballs, I think there would definitely be a larger cause for concern and more things to look into. But so far, I’ve mainly viewed it through the lens of across-the-board struggling.