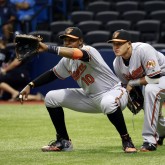 Coming off consecutive sweeps of 2015 playoff teams, the White Sox head into a four game weekend series against the team most closely trailing them for best record in the American League. All remaining claims of success being due to fortune of scheduling are gone; they have gone seven games without scoring fewer than four runs, […]