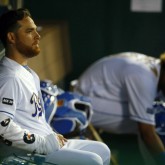 The past four years have been high times for the Kansas City Royals. It’s hard enough in baseball’s modern era to make consecutive World Series appearances, much less actually win the whole thing. 2013-2016 also marked the first four year stretch for the Royals in which they did not have a sub-.500 season since 1977-1980. […]