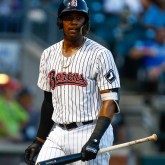 In a rather disappointing press conference Monday afternoon, Rick Hahn announced officially that White Sox top prospect Eloy Jimenez will not be called up to the majors this season, effectively ending his 2018 season. Jimenez hit a combined .337/.384/.577 between Double- and Triple-A this season with his Charlotte numbers being even better (.355/.399/.597). His power numbers are up […]