The White Sox report to camp in about two weeks and, as I wrote about yesterday, we’re coming off of a winter in which there were no ill-fated, half-assed attempts to construct a contender. Rick Hahn & Co. picked a lane and stuck to it, and despite an already impressive prospect haul in the deals […] 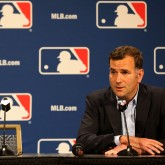 Last weekend’s SoxFest event provided us with our first look at the 2017 White Sox as they’ll likely be constructed. It also gave Rick Hahn his first opportunity to speak about the challenges the team faces as it undergoes its most drastic rebuild in two decades. Hahn’s statements throughout the weekend, both to reporters and […]