There are starters for whom a few ugly Spring outings and reports of velocity loss can be shrugged off. Those starters are not Erik Johnson.

1. Erik Johnson already had enough working against him going into Spring. Weeks before camp, a Mat Latos-shaped obstruction was placed in front of his inside track to a spot in the starting rotation. He was coming off a September audition that provided some nice superficial results but some garish background figures like a 4.99 DRA and a more immediate inability to spin an impressive breaking ball, and it was revealed over the offseason that he might be less likely to soak up the teachings of Don Cooper than the rest of the pitching staff.

Spring Training is mostly meaningless and Johnson getting tuned up in his first two outings — and man, that box is checked — can be shrugged off, and maybe even some lagging velocity could, too. But in concert with every other factor working against him and a previous history of letting sloppy mechanics rob him of juice on his fastball for seasons at a time, this is troubling.

Erik Johnson’s velocity last time out was 87-91. Today it was 85-89, according to a scout in Mesa. Plenty of spring to go. But worth noting.

2. Johnson missing out on the top five spots of the White Sox rotation is to be expected, but the Sox need him to not fall off the map because their rotation depth is not equipped to handle it. Jacob Turner has more name value than reasons to expect success until stories of a Cooper-fueled development or a new pitch emerges. Scott Carroll had some nice moments as a one-time-through-the-order long man last season, but is a spot starter who will quickly strain the bullpen with regular use. Chris Beck would already be a questionable option given his 14.5 percent career strikeout rate in the minors, but he’s working his way back from injury.

In sum, if there’s anything to John Danks‘ March struggles, the scenario Mauricio Rubio of 2080 Baseball floated to me over the weekend, where Carson Fulmer is being rushed into aid midseason, becomes easy to see.

3. Rob Brantly was out of options and needed some sort of early Alex Avila health breakdown to make the roster. While his departure to the Mariners opens up troubling questions about the Sox catching depth beyond the risky platoon of Avila and Dioner Navarro, the Sox might have been doing him a favor by allowing him the opportunity to catch on (get it? GET IT?) elsewhere.

In the meantime, the Sox need to hope Hector Sanchez‘s bat isn’t dead, and are immediately in need of a new goalie. 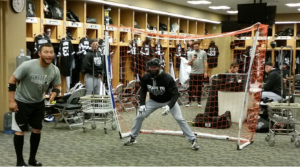 4. Jason Benetti had a successful debut to the White Sox booth on Saturday, showing a good rapport with Steve Stone early and plenty of energy. Despite his newness for the Sox fanbase, he’s a seasoned professional from his ESPN days and should have no real problem handling the work.

Where Benetti will really make a difference is maintaining enthusiasm over the long haul of a possibly disappointing season. An engaged Hawk is an acquired taste for sure, but not the urgent situation needing to be addressed that his listless, morose drifts through the dog days of the season became. Cutting out drives to and from Michiana to Chicago would certainly improve my mood, but the test of the year will be if it provides a rejuvenated Hawk, or just gives Sox fans a season where they get half their games with a superior broadcast and half without.

5. March 24 is the date to start getting worried about Adam Eaton‘s shoulder. That’s because March 23 is his reported target date to return to playing in the field. Eaton has been reduced to designated hitting in Spring games as he completes his throwing rehab program to build strength after October shoulder surgery.

Luckily, Eaton’s slow march to full action hasn’t derailed plans to move him around the outfield corners, and it continues to be refreshing to see how his status of an entrenched starter is not getting in the way of letting a superior fielder — Austin Jackson — man center.

Adam LaRoche also returns to action Monday after missing time with back problems. Being able to look healthy and productive for a long stretch is must for him.