When Mat Latos was signed late in the offseason, it became clear that the race for the final back end starter spot would become a bit more interesting. When Erik Johnson and Jacob Turner struggled in Spring, there became less doubt in everyone’s mind that Latos would end up becoming the man for the job.

White Sox fans shrugged and went along with it, but due to Latos’ prominent home run tendencies and extensive injury history, Sox fans could be holding their breaths to see how the situation unfolds. There is a certain type of warranted curiosity here, seeing as Latos was once a fairly decent starter during his early years in San Diego and Cincinnati. Unfortunately, a barrage of injuries has robbed Latos of his vintage form.

But in his debut start in a Sox uniform last Thursday, Latos successfully executed six innings of one-hit, one-walk baseball. It’s safe to assume that many of us were pleasantly surprised by the outing, however it’s still just one start that presents its own reasons for apprehension. Can we trust this version of Mat Latos to continue to show up on the mound every five days? Only time will truly give us a more decisive conclusion of that question, but in attempts to gain a little more perspective right now as to whether this was a flukey one-time baseball thing with impeccable false hope-inducing characteristics or if there are some underlying indications that this Latos is here to stay, we’ll look a little further at Latos’ outing against the Athletics. 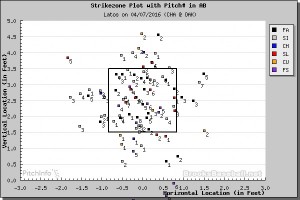 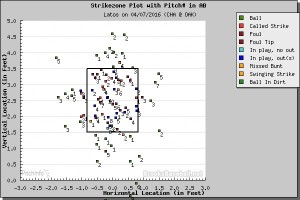 These maps from Brooks Baseball indicate the type of pitches thrown (left) and their result (right) throughout Latos’ entire start on Thursday. This may look like the zone maps for a pitcher who wasn’t locating his pitches well, however Latos was able to put the ball where he wanted it when it became necessary, and used the proper pitches to get himself out of jams. The question is now, how often will that continue to be the case, why did he get into jams, and how lucky was Latos?

Latos threw 30 sinkers (60 percent for strikes) and 26 fastballs (73 percent for strikes) against the A’s, according to the PITCHf/x data. These were the two most frequent pitches of the six types Latos threw. Latos induced swings on 57 percent of his fastballs and 43 percent of his sinkers, and most of those swings creating contact for the flyball outs. However, these pitches were located more in the lower/ middle half of the zone — which is living on the edge seeing as pitches located in this area can easily turn flyouts into home runs when thrown to the wrong batter at the wrong time or in the wrong ballpark. Latos induced six flyball outs, but if you watched the game, you can easily see that many of those balls were hit quite hard and some were taken all the way to the warning track, which left me a bit skeptical. It seems possible that there was a bit more luck on Latos’ side than not for those six outs.

However, the bright side of that is that nearly all of the groundball outs that Latos induced (6) came on well located, low fastballs and sinkers, save for one slider out made by Marcus Semien. When Latos was keeping the ball down, or in on the hands, he was able to make quick outs in a far less risky manner, something that he will need to do more often and with consistency to maintain success in U.S. Cellular Field. (Don Cooper vehemently stated to me at SoxFest that he is working with all of his pitchers to keep the ball on the ground as much as possible, because as we all know, flyballs easily turn into home runs at The Cell.)

One important thing to note is that when Latos found himself in hitter’s counts from sinkers and fastballs off the plate (as you’ll note in the maps above, almost all of the pitches off the plate and high above the zone are sinkers, along with a few curveballs and sliders went awry), he would quickly go to his secondaries — his slider and his splitter — to work on getting ahead in the count. Take a look at the numbers on those pitches in 2-0 counts:

Considering that Latos only threw 11 sliders and 10 splitters total that day, it becomes obvious that these were his go-to out pitches, and judging by the numbers you see here, they worked.

Latos also threw 7 curveballs and 3 changeups during the outing, but both pitches would be considered unsuccessful. Only two of his curveballs and one changeup ended up in the zone. The curveball clearly wasn’t getting the break that he needed (note the location in the maps above), which could lead to trouble, but seeing as Latos’ other secondaries worked well for him it’s not entirely neccesary that he employ the curveball all that often right now.

The overall take away here is that Latos looked good, and due to the fact that he no longer has the velocity to be a strikeout pitcher, he thrives on creating weak contact outs and keeping his pitch count low (which he did, only showing 88 pitches over 6 innings). His weakness will be the mistake pitches he leaves in the heart of the zone, and in the future batters won’t be a friendly to those as the Athletics were. He will also struggle during the times when he gets into two and three-ball counts and isn’t able to reconcile the situation effectively, via an out pitch or a well placed fastball or sinker that creates out-making contact.  His mehods worked well in this game, however, I’m not sure I see them consistently working for an entire season. But if he can continue to keep the ball low, create groundball contact, and keep his secondaries sharp, then perhaps Latos won’t be as chaotic as we had imagined him in the four spot. Latos’ next start will be tonight against the Minnesota Twins, which could be a good test despite their struggles.

Tags: Chicago White Sox, Don Cooper, Mat Latos, Minnesota Twins, Oakland Athletics |
Cat Garcia
Follow @TheBaseballGirl
Cat Garcia is a freelance baseball writer from Chicago. When she is not writing or reading about baseball, she can be found at her place of employment, located at 1060 W. Addison Street.
read more from Cat Garcia

2 comments on “The Mat Latos one-hit game: A fluke or an indicator of future success?”