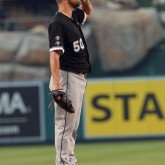 Having already matched their 2015 win total against the Rays, the White Sox will now attempt to surpass it behind a man who has thus far emerged as the starting rotation’s weak link. The Sox team starter ERA is first in the league, nearly half a run better than the second place Kansas City Royals. […]