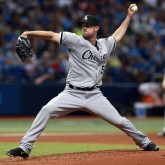 Coming into 2016, the White Sox did not seem to be under any illusions about the back of their rotation.  After Chris Sale, Jose Quintana, and Carlos Rodon, there was a staggering drop off to the fourth and fifth options.  They started with John Danks and Mat Latos, one by inertia, and the other as […]

The assumption when the fourth and fifth-place teams in the AL Central square off in the finale of a four-game set, and drag themselves, the paid attendants, the stadium staff and broadcast crews through a four-hour, 46-minute, 24-run war, that this is awful, low-quality baseball; a joyless slog. Let’s operate under a different assumption, that […] 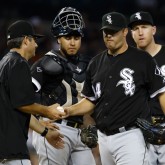 The White Sox started a pitcher Tuesday night who came into the game with a 9.61 ERA, with more walks than strikeouts, and who had more than a third of the hits he had allowed leave the ballpark entirely. There was good reason to expect the Sox would allow a garish run total to […] 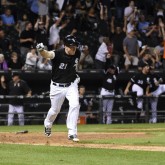 After playing the last couple of series against teams with records even poorer than theirs, the White Sox found themselves back up against a team with actual playoff aspirations.  In their own meandering way, they helped to push those aspirations down by adding a loss to the Mariners’ ledger and dealing the mental blow of […] 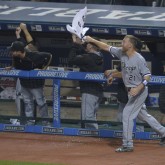 Sometimes it’s hard to remember that for all their frustrating flaws, the Sox aren’t much worse than an average team, and get to have fun nights too. This was a fun night! With Anthony Ranaudo filling in for a spot start against verified stud Carlos Carrasco, facing an Indians team that had defeated the Sox […] 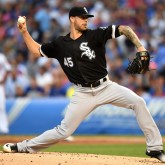 I mean, probably not. The first images of Anthony Ranaudo Wednesday night were infuriating. Here’s a guy who has spent the last few seasons bouncing around between increasingly slim opportunities to stick, and finally found some traction in Triple-A Charlotte by filling up the zone with his middling stuff, and here he is in a nationally […] 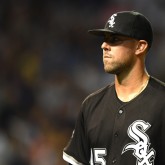 Taking the bump Wednesday night in lieu of the internationally renowned fashion guru, Chris Sale, was Anthony Ranaudo. You know, that guy that the Sox murdered and then immediately acquired. No, not that one. This one. He squared off against Cubs right-hander Jason Hammel, as the Sox dropped the first of two at Wrigley. • What looked like a blowout waiting […] 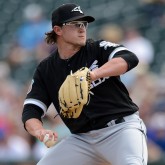 Looking for a rare strong second half push, the White Sox are throwing all of their internal options into the fire. Justin Morneau was activated from the disabled list and Carson Fulmer was called up from Double-A, all in one aggressive swoop. Jason Coats was also optioned, while Avisail Garcia remains. More on that later. […] 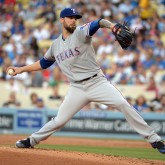 Texas reliever Anthony Ranaudo entered Tuesday’s rain-soaked game against the White Sox in the third inning when the game’s starter, Derek Holland, was unable to complete the frame after the game resumed following a 78 minute rain delay. Ranaudo somehow managed to record four outs for Texas in what wound up a 13-11 Rangers victory, but not before walking […]